The week will begin with near-record high temperatures continuing across the Front Range. However, we will see a gradual downward trend in temperatures thanks to increased clouds and scattered storms over the state. We are also tracking a few cold fronts on the horizon that look to finally breakdown that persistent ridge leading to much cooler temperatures next week.

This week’s highlights include: 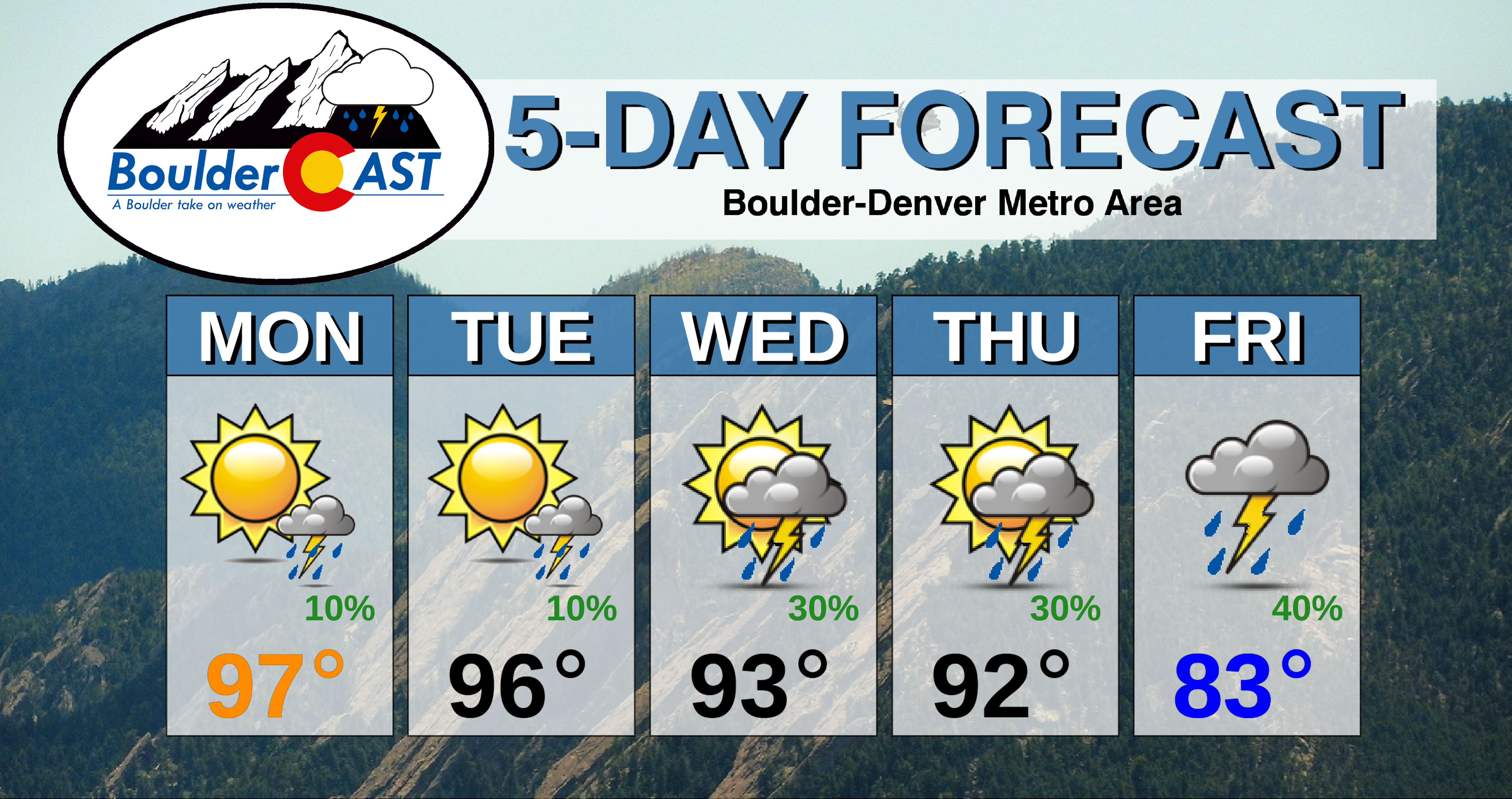 DISCLAIMER: This weekly outlook forecast is created Monday morning and covers the entire upcoming week. Accuracy will decrease as the week progresses as this post is NOT updated. To receive daily updated forecasts from our team, subscribe to BoulderCAST Premium.

Hot to start along with smoke and haze

Not much change in our weather pattern to start out our work week. As indicated below, the high pressure ridge remains anchored over New Mexico/southern Colorado, and hot conditions embedded within. High pressure exists also off the east coast, which is a major player in the two tropical cyclones expected to track into the Gulf Coast this week. The remnants of Genevieve off the coast of California are tied to a weak trough over the Pacific Northwest. It is this very weak trough axis that will help ensue a late-week cold front. But before that happens, we start out with near record heat this week. As we saw yesterday, clouds developed during the afternoon hours both in the mountains and Plains. That should be what occurs today as well, with temperatures hovering in the middle to upper 90’s. Unfortunately, with little wind to move out any smoke and haze, the wildfire air quality will remain an issue to start as well. 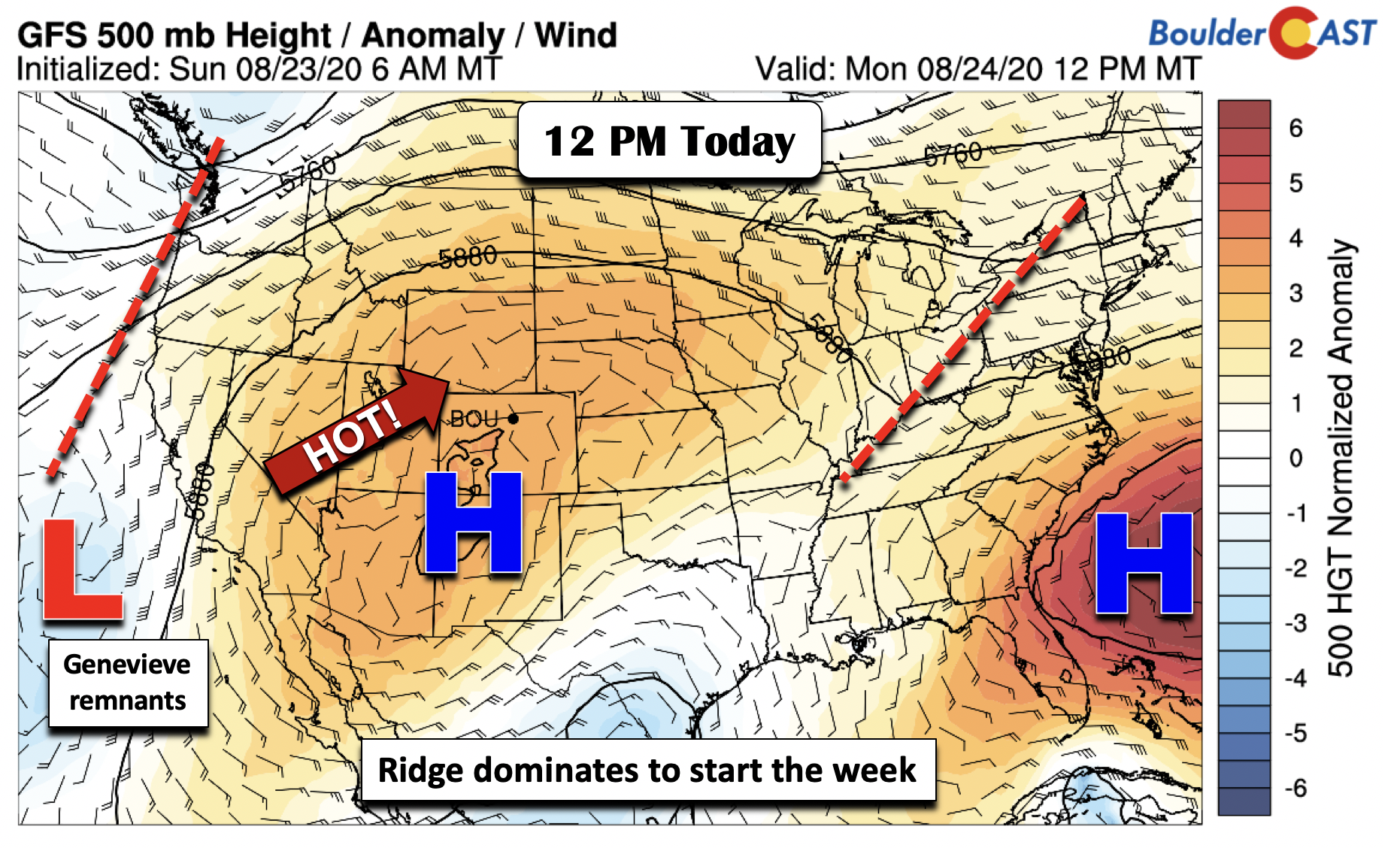 There will be a few isolated/scattered storms forming over the higher terrain today. Most will be weak with mainly just clouds for the Front Range. We can’t rule out a stray storm reaching the Denver Metro, but it will be hard-pressed to survive. 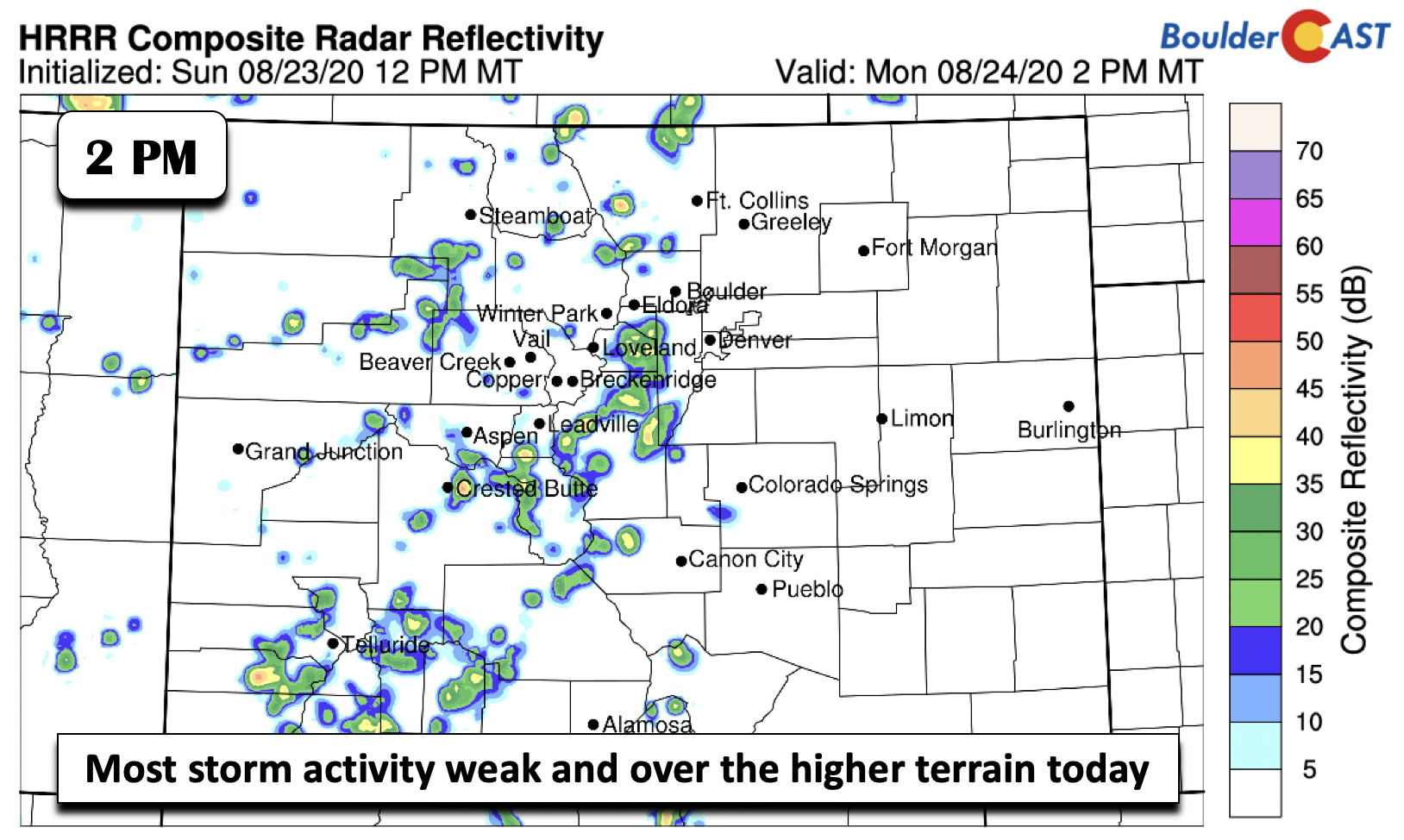 Our chances of storms actually appear to increase ever-so-slightly as we traverse the week (below). The ensemble precipitation outlook calls for higher probabilities of storms, especially in the Tuesday through Friday timeframe. We’ll discuss the reasons for this in a moment. It looks like, though, the greatest activity of storms will reside over the Mountains, though some could survive their trek onto the Plains each day. The higher rain chances in the mountains will mean morning sunshine for Boulder and Denver, followed by afternoon clouds, keeping temperatures from getting too extreme.

Our increased chances of storm activity, primarily over the High Country, is due to a few subtle features. For one, the remnants of Genevieve out in the Pacific brought a weak surge of moisture into the state on Sunday. The aftermath of that plume of higher precipitable water has enveloped much of the western U.S. While the moisture tomorrow and much of this week is not tied directly to Genevieve, there is a more northward penetration of higher moisture content pushing in from Mexico and Baja California as we go from Tuesday through Friday (below). These figures show the anomalies in precipitable water. Take note of the greens and blues over the west, a sign of higher moisture content. With the lack of any real forcing mechanism, the moisture will mainly fuel isolated to widely scattered storms forming over the Mountains. A few will push eastward across the Plains giving the Metro area chances as well. By Friday, moisture rises further behind a cold front, with a better threat of forced storm activity for the Front Range. 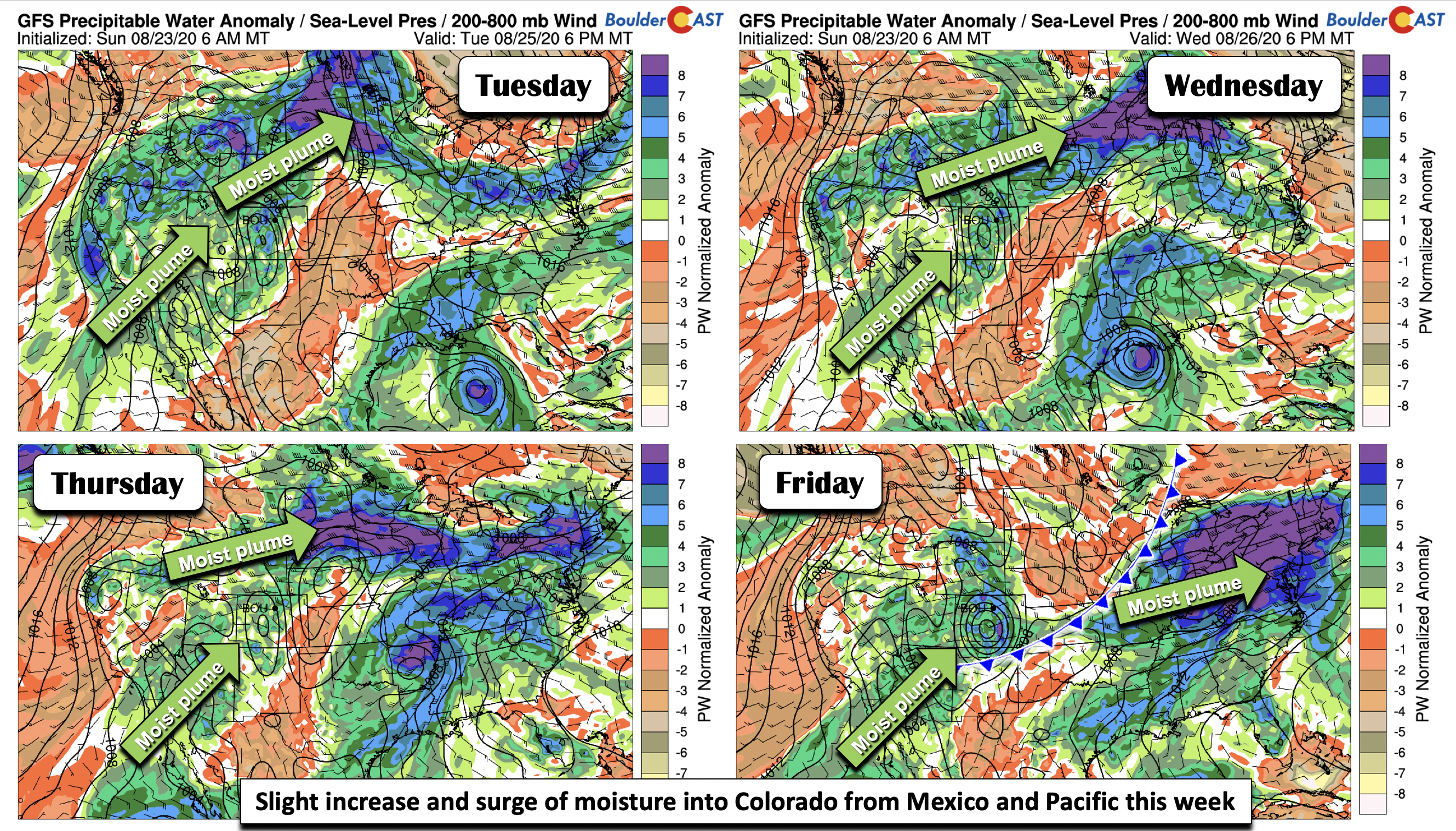 Bottom line, it looks like your typical summer pattern with daytime heating, afternoon clouds, and a 10-30% chance of storms each day. As seen below, the GFS model shows at least some precipitation accumulation for the entire state, with most of that residing along the ridge tops in the Mountains. This could both help and hurt the wildfires across the state (lightning over drought-stricken areas can lead to new fires, e.g. California). The trend would be for slightly higher chances of storms in the Mountains/Plains each successive day this week. That trend would favor highs in the upper 90’s Monday, followed by lower 90’s toward the latter half of the week thanks to more clouds and storms, and eventual lower 80’s by Friday with a cold front. 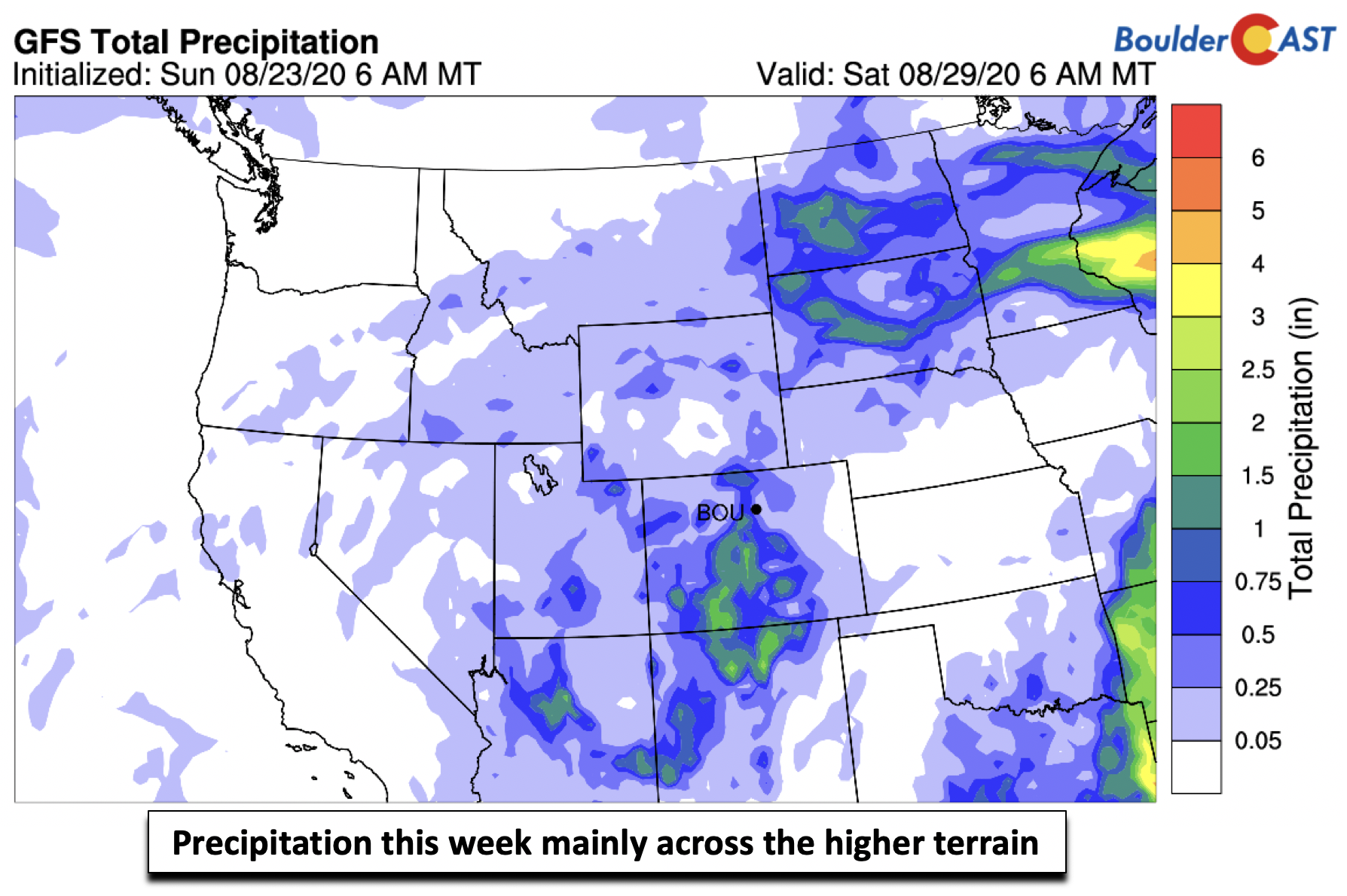 Speaking of the cold front, there is good agreement in the longer range model guidance that a rather notable cold front slides through Friday (below right). Prior to that, in the upper-levels on Wednesday (below left), note a weak trough axis off the coast of California into the Pacific Northwest. It is this weak trough axis, as we discussed earlier, that will allow a dip in the jet stream and the frontal push on Friday. This late week cold front drops the temperature of our airmass by 6°C, so we could easily see lower to middle 80’s by week’s end. Alongside the front, Friday will have our best chance of rain for the week with elevated moisture and finally a lifting mechanism with the front nearby. 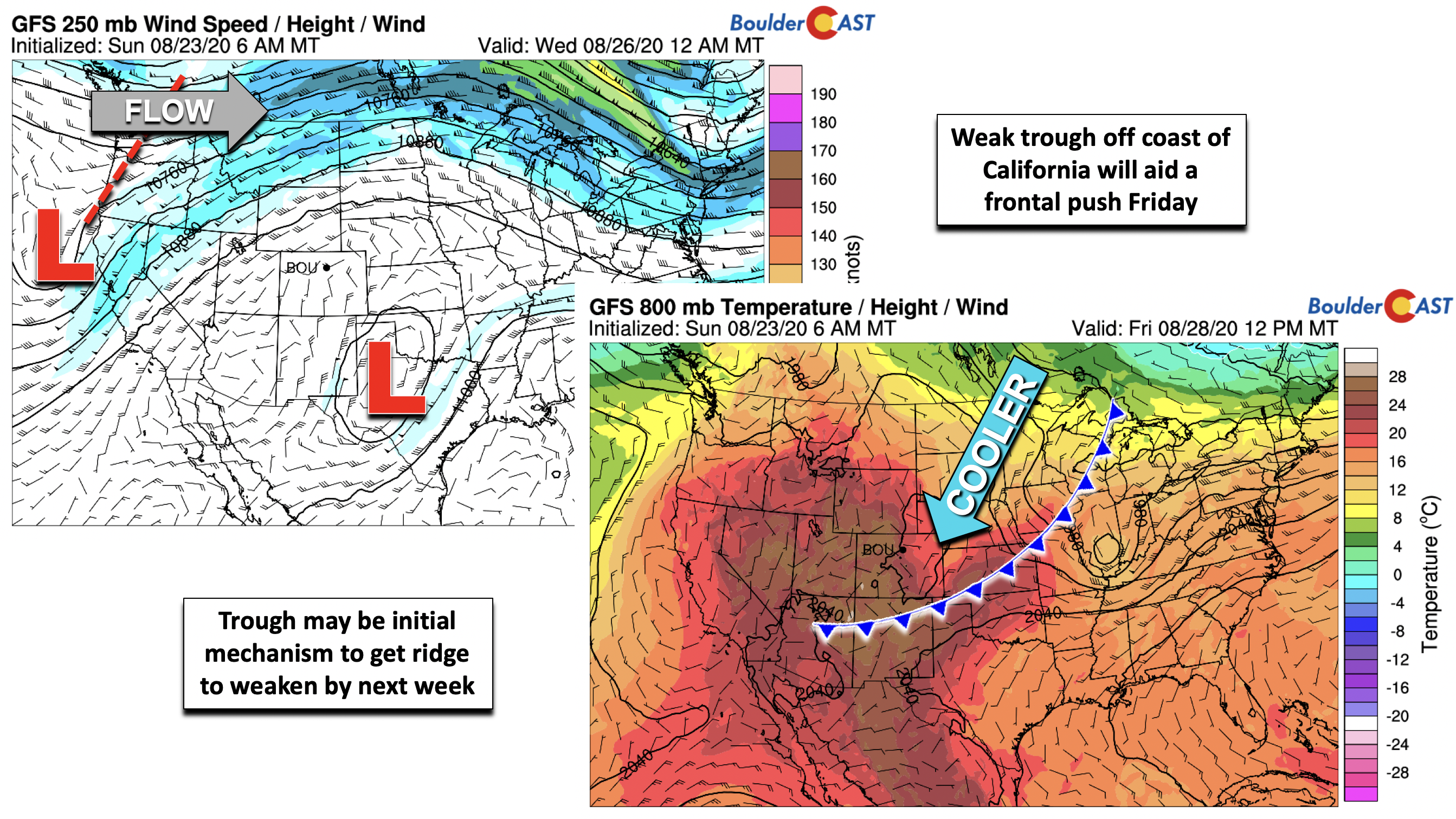 Will we finally see the ridge break down next week?

That Friday cold front could open the door and allow the ridge to weaken further by next week. Sometimes all that is needed is a slight change in the pattern to cause for a dip in the jet stream, which allows the pattern to flip. Indeed, there are hints in the longer range both in the ECMWF and GFS models that by the end of August, which is next Monday, we could see a rather deep trough sliding southward out of Canada into Montana and Colorado. This would shunt the ridge well off to the south into the Gulf of Mexico.

We usually do not have high confidence in something eight days out, but it is certainly something to keep an eye on. The ensembles are also showing this same general pattern, which does keep us optimistic. This would favor a much cooler pattern and possible unsettled weather, too….both of which would help with the ongoing drought and statewide fire ban. 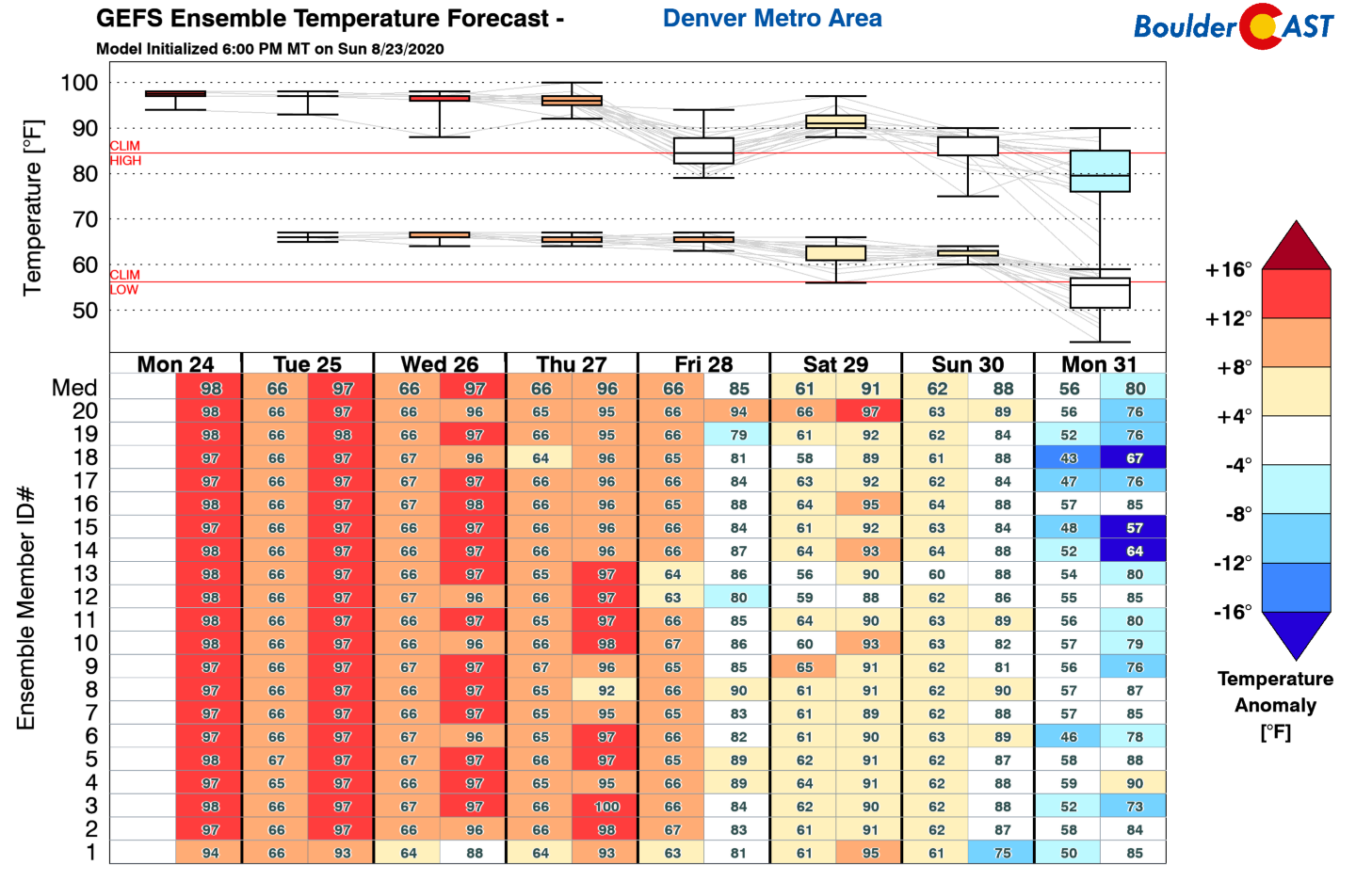 Have a great week!

Monday: Sunny skies giving way to a mix of clouds and sunshine and a storm or two. Highs hot in the middle to upper 90’s on the Plains and lower 80’s in the Foothills.

Tuesday: Morning sunshine giving way to afternoon clouds and a chance of isolated storms. Highs in the low to middle 90’s on the Plains and upper 70’s in the Foothills.

Wednesday: Morning sun followed by increasing clouds and scattered thunderstorms. Highs in the lower 90’s on the Plains and upper 70’s in the Foothills.

Thursday: Mostly sunny giving way to partly cloudy skies scattered late-day storms. Highs in the lower 90’s for the Plains and upper 70’s in the Foothills.

Friday: Cooler behind a cold front with scattered to numerous thunderstorms. Highs in the lower to middle 80’s on the Plains and lower 70’s in the Foothills.

Weekend: An initial cool down Friday will give way to warmer weekend temperatures, along with that continued slight chance of late-day storms.

High Country:  Isolated to scattered storms will be present across the mountains each day this week, with peak storms occurring in the afternoon hours. Storms will likely develop with little warning and be spotty in nature. Be sure to hike early to avoid lightning. Check our SummitCAST page for daily updated forecasts for more than 120 mountain hiking destinations across Colorado. Here’s a look at at the lightning threat statewide on Friday.

Help support our team of Front Range weather bloggers by joining BoulderCAST Premium. We talk Boulder and Denver weather every single day. Sign up now to get access to our daily forecast discussions each morning, complete six-day skiing and hiking forecasts powered by machine learning, first-class access to all our Colorado-centric high-resolution weather graphics, bonus storm updates and much more! Or not, we just appreciate your readership!

Born and raised in St. Louis, Andrew has a Ph.D. in Atmospheric Science from the University of Colorado in 2015. From 2015-2020, he worked remotely in Boulder as an atmospheric scientist with NOAA’s Atlantic Oceanographic and Meteorological Laboratory in Miami. Most recently, he is a meteorologist with NOAA’s National Weather Service in Raleigh, NC. He still has a passion for weather along the Front Range!