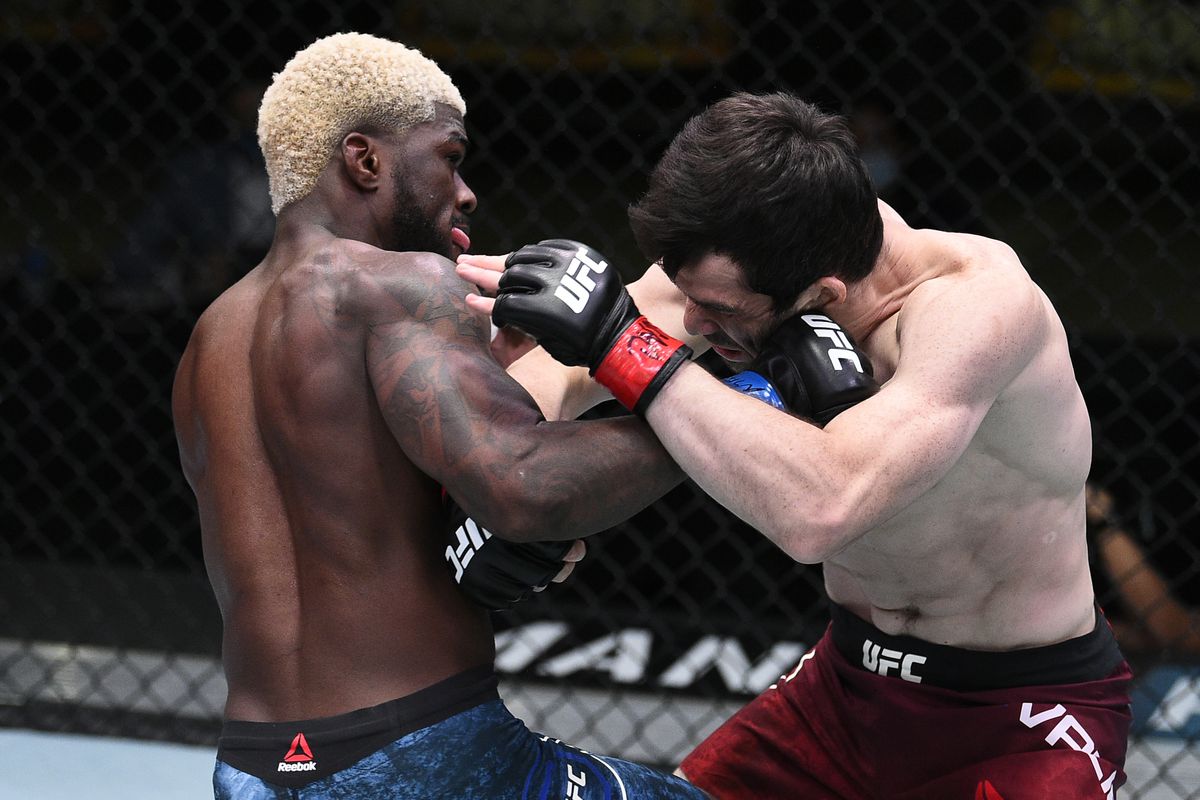 Frankie Edgar and Pedro Munhoz capped off Saturday night’s event with a bang, but the theme of UFC on ESPN 15 was comebacks.

Trevin Jones, Daniel Rodriguez, and Shana Dobson all earned come from behind victories in what turned out to be an action-packed night.

The evening began with Timur Valiev utilizing all eight limbs to dissect late-replacement opponent Trevin Jones. A piercing body kick nearly forced Jones to his knees with a couple minutes remaining in the opening round.

Jones was simply fighting to survive until the end of what was a 10-8 round in favor of Valiev.

The second round began similar to the first with Valiev having his way. Then, with 3:13 on the clock, Trevin Jones proved that one strike is all it takes.

Jones landed a menacing right hook that found Valiev’s chin and sat him down. He then worked to finish Valiev to secure an unbelievable comeback win in his UFC debut.

It took just 45 seconds for late-replacement Dwight Grant to drop Daniel Rodriguez. After the knockdown, Grant searched for the finish and did not let Rodriguez up for another 45 seconds.

There were several instances where the referee could have stepped in and people wouldn’t have complained. Despite being knocked down and taking a ton of damage, Rodriguez returned to his feet and looked like the fresher fighter.

Once back to his feet, the one-two landed over and over for the rejuvenated Rodriguez, eventually dropping Grant against the cage. The ref stepped in to stop it and ‘D-Rod’ earned his third straight UFC win.

Shana Dobson came into her fight with Mariya Agapova as the biggest underdog on the entire card (+900). However, it was evident from the beginning that Dobson deserved more respect.

Still, Agapova found some success earaly on landing body kicks out of her southpaw stance. Dobson got the fight to the canvas, but chasing a submission led to her on the bottom fending off Agapova’s strikes and submissions for the opening round’s final ninety seconds.

She found herself on the bottom again early in the second, but a swift reversal got her to full mount where she earned the TKO finish.

Her first UFC win will be one to remember and she’s got a great team at Elevation Fight Team in Denver, Colorado where she’ll continue to improve.

For a card that had so much turnover, it ended up being a tremendous success. Dana White actually had this to say regarding the wild fight week:

“This has probably been the craziest week we’ve had since this whole thing started.”

Trevin Jones, Daniel Rodriguez, and Shana Dobson played a big part in the event’s success and they all deserve recognition. It was truly a night of comebacks to remember.