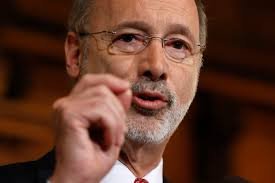 The governor’s call to legalize the sale and use of marijuana is part of a broader plan that Wolf says will help Pennsylvania’s economy, which is suffering from months of shutdowns and slowdowns due to the COVID-19 pandemic.

Wolf’s plan calls for some of the revenue from marijuana sales to be used to fund grants for small businesses. And 50% of that funding, he says, would be reserved for historically disadvantaged businesses.

Other revenue would go toward “restorative justice programs that give priority to repairing the harm done to crime victims and communities as a result of marijuana criminalization.”

Marijuana has been legal for medicinal use in Pennsylvania since 2016, thanks to legislation Wolf signed. The state formally activated its medical marijuana program in 2018.

It’s uncertain what kind of reception the Democratic governor’s plan could meet in the Republican-led General Assembly. Wolf acknowledged that in recent months, Democrats’ initiatives “have been stopped at every turn by the Republican majority focused on ignoring the public health crisis.”