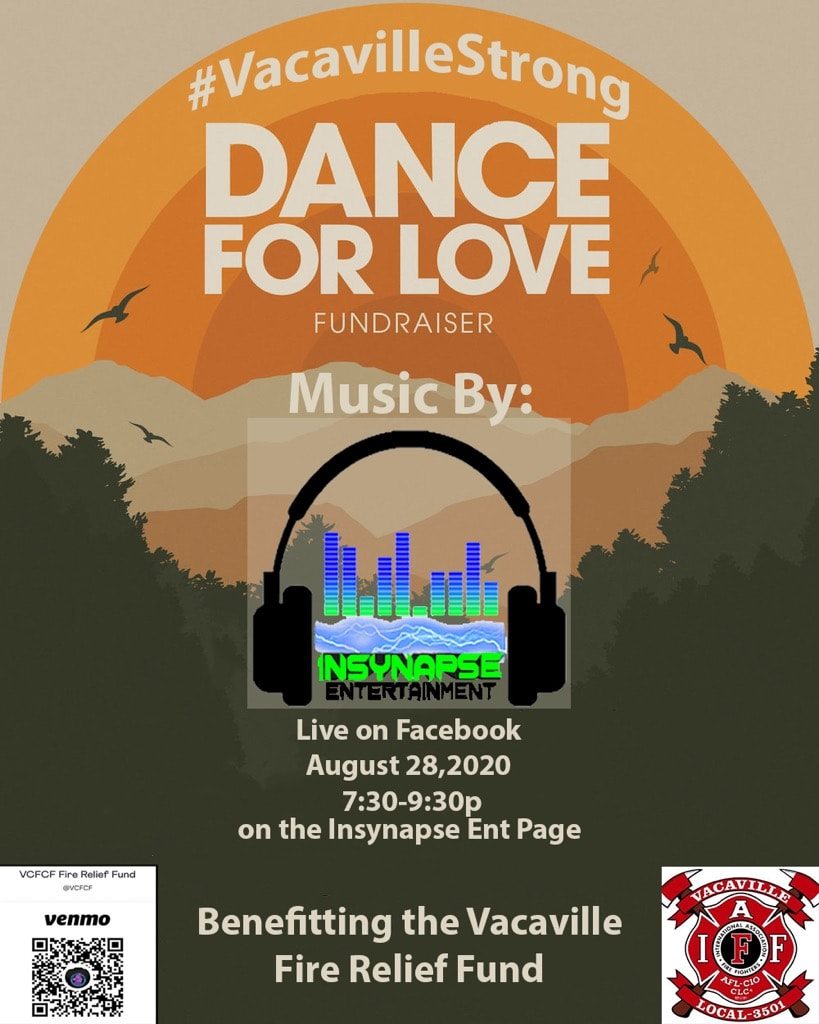 Insynapse Entertainment, in conjunction with Vacaville Firefighters Association Local 3501, will hold a dance fundraiser Friday night for those impacted by the LNU Lightning Complex Fires.

However, with the shelter-at-home order still in effect, the party will be hosted online so participants will be able to jam to current and classic grooves without even leaving their homes. Dancers are encouraged to put on their dancing shoes, grab some cocktails and turn their homes into a dance club for one night.

DJs Ed Combong and Chriztian will be spinning two hours of dance favorites from the ’70s to today. Combong said the playlist would be an eclectic mix of hip-hop, country, Latin pop, Top 40 hits and a whole lot more.

Combong is a member of Young Professionals of Vacaville, a group of Millennials in the local business world who come together to empower the next generation of business leaders. The day after the fires, the group had talked about doing something to benefit the victims.

“They were just mentioning the devastation that they had already learned (of) from the day before,” he said. “To hear of people that were affected, it really concerned me. I have two friends that I heard they lost their homes completely.”

Since then, Combong has been volunteering in Solano County where he can. He talked with his social media team about doing a benefit concert.

Combong has done fundraisers in the past. When a security guard at Rockin’ Jump Trampoline Park — where Insynapse are resident DJs — lost his wife in an accident, a smaller-scale benefit was held.

“We donated our time,” Combong said.

In addition to tunes, there will also be opportunities to donate to those in need. Vacaville Firefighters 3501 has set up a Venmo page @vcfcf for people to donate to the Vacaville City Firefighters Charity Fund. The QR code can be scanned at the association’s Facebook page at Facebook.com/VFALocal3501/ or at Insynapse Entertainment’s Facebook page at facebook.com/insynapsedj.

Combong said the show would be a good opportunity for people to take their minds off all the negative things going on in the world at the moment.

Combong said the event is another way to showcase Vacaville’s sense of community. He grew up in the Pinole area and has lived in numerous places but said Vacaville welcomed him with open arms. That feeling, he said, is evident throughout the community.

The “Dance for Love” fundraiser will be streamed from 7:30 to 9:30 p.m. Friday at Facebook.com/insynapsedj.