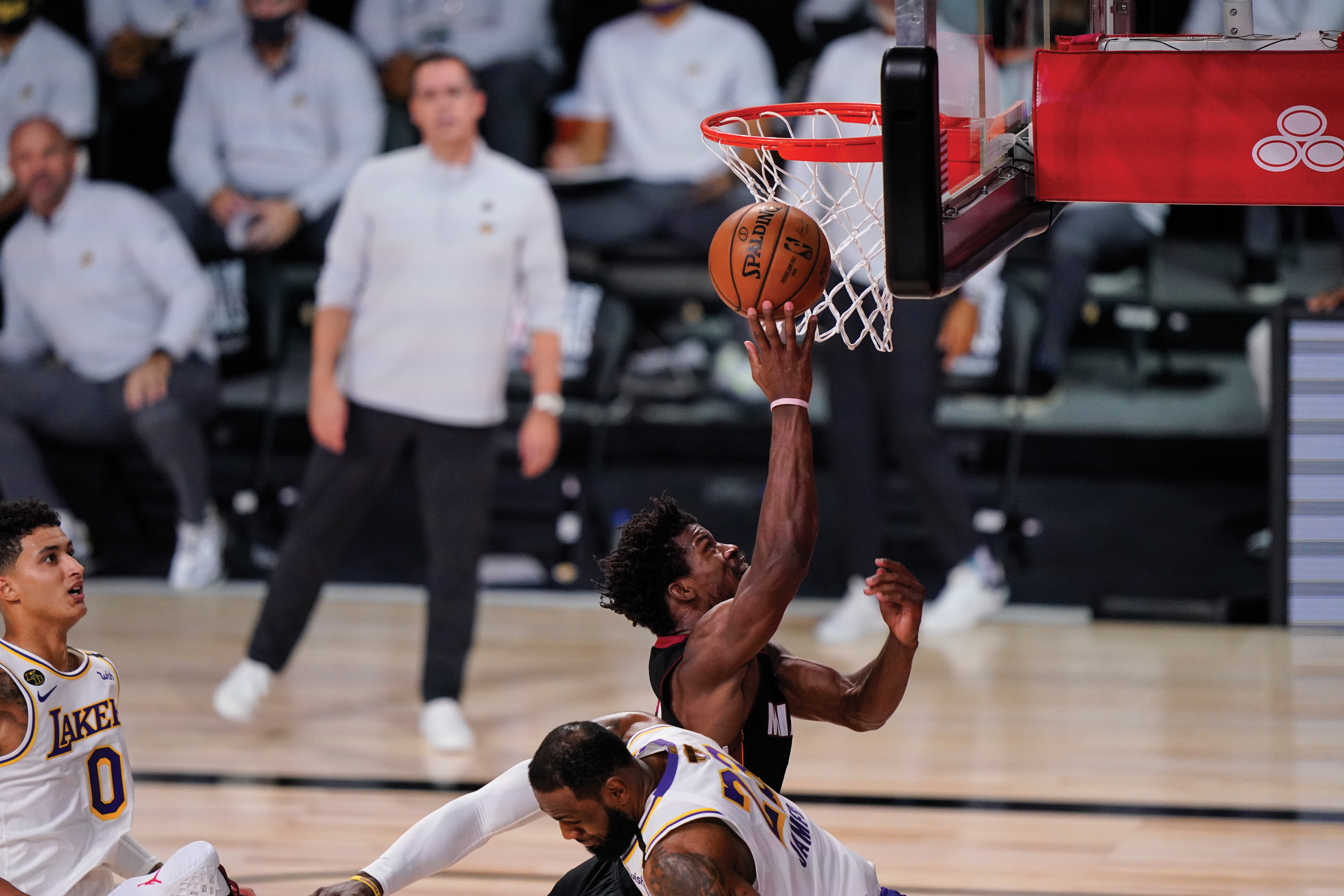 There will be a Game 5 Friday night, Oct. 9, in the NBA Finals. The Miami Heat’s Jimmy Butler saw to that.

Just when it seemed the Los Angeles Lakers might waltz through the best-of- seven NBA Finals without breaking stride, Butler hoisted a triple-double stop sign.

The 31-year-old veteran enjoyed perhaps the best game of his career as the Heat won 112-104 Sunday night in Game 3 in Lake Buena Vista, Fla.

Furthermore, he so frustrated Lakers megastar LeBron James that James stalked off the court with 10 seconds left on the clock, claiming he thought the game was over.

“How do you say it other than Jimmy F’n Butler,” said Heat Coach Erik Spoelstra. “Jimmy is a supreme, elite competitor.”

The Lakers won the first two games over the injury-plagued Miami Heat — missing Bam Adebayo and Goran Dragic — with ease. The Lakers prevailed Tuesday night in Game 4 with a 102-96 win. Game 5 is set for 9 p.m. Friday, Oct. 9, on ABC television.

He became only the third player in NBA Finals history to score a triple double with at least 40 points, joining James and Jerry West.

Also, Butler is the first to score 40 points without attempting a 3-pointer since Shaquille O’Neal in 2002.

There had been some jawing between Butler and James during the tense struggle. Early on, Butler said that James shouted, “You’re in trouble now,” during a Lakers’ run.

Butler admitted he returned the same line in the late going with the Heat in charge.

“It’s competition at its finest,” Butler said. “I think LeBron got the best of me many times. I respect the guy for it, but this is a different time now, a different group of guys around me.”

A native of Houston, the 6-foot-7 Butler joined the Heat this season after previous stints with the Chicago Bulls, the Minnesota Timberwolves and the Philadelphia 76ers.

This is his first shot at the NBA Finals. Initially, Butler was a first round draft choice of the Chicago Bulls following an outstanding career at Marquette University and Tyler Junior College in Tyler, Texas. The Lakers are looking for their 17th NBA championship. But it would be the Lakers’ first since 2010. The Miami Heat won the championship in 2006, 2012 and 2013.

O’Neal and Dwyane Wade were Miami’s leading lights in 2006. James was the Heat’s ringleader in 2012 and 2013 before transitioning to the Cleveland Cavaliers and, now, with the Lakers.

By extending the playoffs, Butler will continue to operate his “Big Face Coffee Shop” out of his hotel room in “The Bubble,” the NBA’s protective sphere for teams at Walt Disney World in Florida during the COVID-19 pandemic.

Butler opened for business after becoming disappointed with the hotel’s java options. Using his French press brewer, Butler sells a single cup of coffee for $20.

While that may seem costly, after Butler’s Sunday performance, coffee-sipping customers might even want to add a generous tip.